Bollywood’s hottest couple Ranveer and Deepika finally got Married in a lavish Italian Island. The couple announced their wedding shortly in Coffee With Karan show. Ranveer Singh and Deepika Paducone have been dating each other for six years and been consistently in Bollywood gossip. They also showed their successful on screen chemistry in three box office hit films. The weeding ceremony took place in Lake Como, Italy on 14th and 15th of September.

The couple, Deepika and Ranveer is dating each other for last 6 years and became so popular for their cute public appearances. Ranveer stated that he saw her in a restaurant while he was shooting for his debut film Band Baja Barat and was starstruck. But at the beginning Deepika thought Ranveer is not her type and denied to date.

The rumor has it that Ranveer and Deepika started having affair on the set of Goliyo Ki Raasleela Ramleela. It was also their first film together and become a box office hit. From then the couple Ranveer and Deepika been appearing in public and shared complement for each other.

Ranveer and Deepika: Films Together

Ranveer and Deepika have gifted Bollywood with three biggest hit. Their first film Goliyo Ki Raasleela Ramleela (2013) is an Indian adaptation of Romeo and Juliette. This Bollywood classic showed the perfect chemistry of this couple. The movie was released on 15 November and they also got married on 15th November.

Bajirao Mastani was another hit and set milestone as a Bollywood classic. The well depicted love story of Bajirao and Mastani got huge applause for their mind blowing on screen chemistry.

In 2018, Ranveer And Deepika did their third film together and got big box office success. In Padmaavat, though this couple played enemy but they did really well in their roles. Sultan Alauddin Khilji played by Ranveer Singh, attacked the kingdom for the Beauty of Rani Padmavati played by Deepika Padukone. But depiction of the opposite, the both characters came out of the box with their acting ability. And given their consecutive third success. 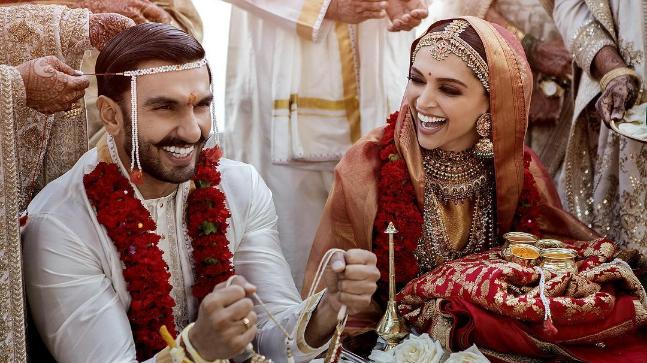 Ranveer and Deepika chose one of the most breathtaking destination for their wedding in Italy. Lake Como is the deepest lake in the entire Europe and the third largest lake in Italy. This place is famous for its exotic resorts and mountain scenery.

The wedding finished in two styles which took place in 14th and 15th of November. On 14th, the wedding happened in Konkani style and on 15th event followed the North Indian style. On the first day, Konkani foods were the main dishes and the second day, the guests enjoyed North Indian Foods. Rebound Chefs of the relevant traditions, prepared foods along with some foreign chefs. Even all the Italian resort personals had to wear Indian attire according to Konkani and North Indian tradition.

The bride worn her most favourit Sabyasachi outfits in all the wedding ceremony. Even both Ranveer and Deepika arrived in Mumbai wearing Sabyasachi designs. They were seen arriving Mumbai Airport wearing matching Punjabi and Salwar with designed red over cloths. In wedding days, Ranveer always worn Punjabi and traditional attires and Deepika also followed the traditional Salwar fashion.