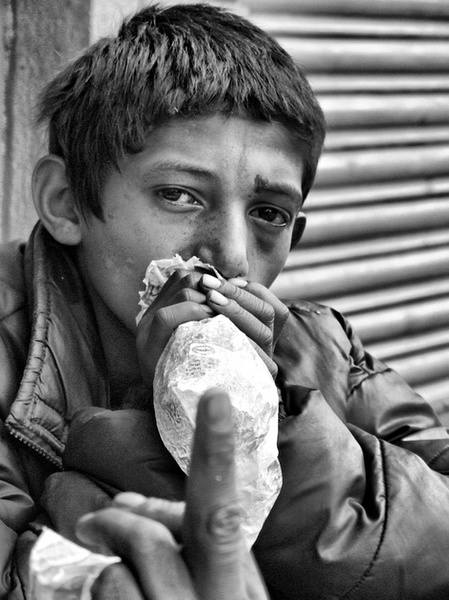 Addiction for Drugs among street children are rapidly growing and in Dhaka it has become a major problem.

Walking at midnight in
Uttara, the hot weather grabbing my fastened breath, but a smell caught my attention while I was struggling to pass the filthy crossover. A group of children including girls enjoying some packets in utter silence and some others are preparing to sleep with dizzy eyes. And suddenly I realized it is happening before our conscious eyes almost every day. My curiosity took me close enough to see their expression closely, slowly and fearfully sat beside them with an investigative manner. A bottle of Gum and couple of marijuana sticks left in the corner, half hidden under an unseen piece.

It is often encountered that the present generation of teenagers are involved in drug abuse, and frequently become the issue for social distress. But in most of the cases, the addiction among the street children remains in ignorance because of the ill treatment of society which make them more vulnerable for the whole system. The initial addiction is an outcome of depression of troubled childhood, parent-less upbringing and ill treatment from certain people are responsible for the condition.

While I was talking to Karim one of eldest among the children, he was staring at me with his deep and dizzy eyes and started warning me to leave the place. But I rushed into my chest pocket to get some money, a note of hundred bought me some time to have a word with them. All of them are orphans except one. Karim is most probably twelve to fifteen who started with the gum (for rubbers and leathers) and now having several types of drugs including marijuana, smoke of burning plastics etc. Others are roughly eight to twelve who used to collect empty bottles for income purpose.

Large amount of street children are taking drugs in various parts of Dhaka who happened to sleep in stations, roadsides, on foot over and other garbage like places. According to Human Development Index, there are more than half million street children in Bangladesh and almost 75% of them are living in Dhaka and 90% are drug addicted, the lack of education, pure water and deprivation pushes them to lead a life of unbearable depression.

They have elders among them who used to lead them in any situation that they are
unaware of. After the drug they can take any action if they get some motivation. In airport area, they steal chickens, fish from the shops and even from the supply van without any hesitation. As another person told me beside Dhaka Airport that they can even kill anyone unconsciously when they are in addiction. At the very moment a few police officers were passing the spot and suddenly I was afraid but I did not see any sign of fear in that child`s eyes.

Social scientists and psychologist emphasize that children are easily motivated by others
because they learn quickly and learn from the elders. Drug addiction also comes from lack of mother care which is obviously the case of these street child. Out of all these they get a perception of legitimacy of their crime. It is really vulnerable for the society. Later on this little action or crime gets a major form which even gets irresistible for the law enforcement.

The moment I spoke to Karim and his friends, people who were passing by had an expected gesture and it seemed like two criminals having a conversation though it was quite normal in a sense. But this is the attitude that push the street child into utter depression which cause a massive mental damage. A crime must have a past which is rarely investigated in the context in Bangladesh. Governments have been ignoring the fact over the decades and even there is no special care center for street children. Though there are few private organizations but it is insufficient for the massive amount of children. And also the people who employ them do little for them. On the other hand most of employers deprive them for money very badly.

Within that short time at midnight most of them fall into deep sleep some of them were still on their bottom listening to Karim and my conversation. When Karim was looking at the road others are in deep narcotized death, not bothered by the sports car passed beneath us. Girls and boys were sharing the same bed some of them even cuddle like couples. The lights on road has brightens everything but do not affect their dark life.

The condition that has taken a form of an evil in the society is getting worse day by day. The drug is not just killing the norm and children rather it kills the social dignity. The government, the police should take immediate action so that millions of Karim can be saved from the aggression of the poisonous drug. Proper education, enough care and public attitude may help Karim and thousands of others getting out of darkness who may help the nation with his light.