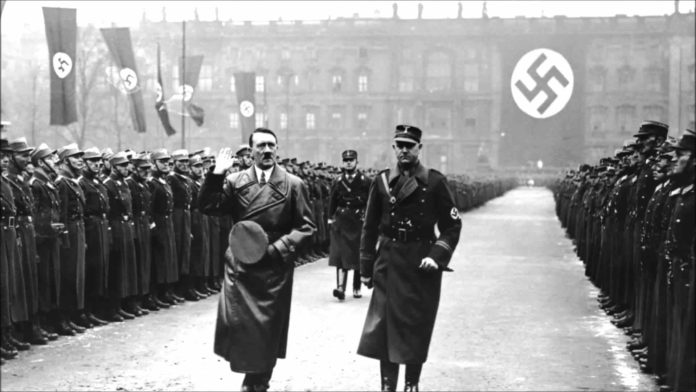 Some historical events have defiantly changed the world and its social and political interaction. These are periods that, regardless of whether they are good or bad, necessarily require in-depth reflection. And if we want to mention one event that has shaken the core of humanity and political history, that would be the German Holocaust.

In this way, we can easily consider Nazism as a historical fact that was able to change humanity and political history in a way never seen before. Thus, it reflects on society, national and geopolitics, economy and many more including in the present times.

It should be noted that it is from this type of historical reflection that we have managed to evolve as a society, making the world more respectful and egalitarian. Though there are significant disagreement from many scholars, yet it changed the world for sure.

Thus, even today Nazism in Germany is studied all over the planet, since many scientists and historians are still trying to understand how the dynamics of this social movement took place, how it spread and why it was so cruel.

Therefore, we have decided to move through the history of World War II and the German holocaust. With the existing facts and stories, this article is going to cover many of the aspects of Nazism in short. So, read on and learn what, how and why the event took place.

How do We Define Nazism?

National Socialism or Nazism is an ideology that was created in the city of Munich, Germany, in the year of 1919. This ideology was based on the radical division of German society at that time. On the one hand, the Aryan race, as a symbol of strength, Germanic superiority and purity. On the other hand, Jews, blacks, foreigners and homosexuals, characterized by ideology as inferior beings.

There are other classic points of the characteristics of Nazism, as well as specific aspects that will help answer what Nazism is, such as:

It was basically from these elements that Adolf Hitler was able to unite Germany and start one of humanity’s darkest historical periods.

The Brief history of Nazism?

After the First World War, which ended in 1918, Germany faced, a serious social crisis, characterized mainly by the poor living conditions given to its peasants and workers. In addition, Germany was also facing a communist threat.

Many of these German social problems were caused by the effects of the Treaty of Versailles. With the Versailles Treaty, Germany got economic restrictions and fines from many countries.

Thus, the historical period between 1918 and 1933 was marked by a troubled political scenario for Germany. Because, between this period, the National Socialist Party of the German Worker was created, whose leader was the hitherto unknown Adolf Hitler.

In this social context, Hitler’s party, in a populist and authoritarian manner (along with other elements already described in the Nazi ideology), managed to deceive the German population (which until then lacked leadership).

Thus, through various political maneuvers and manipulation of public opinion, Hitler was appointed German Chancellor in 1933. And guess what happened? The history of Nazism begins.

The Minds Behind the Nazi Mechanism

Adolf Hitler – The Architect of Nazism

Without a doubt, he was the main Nazi leader in the world. He put his ideals into practice, especially after becoming German Chancellor. Because he killed millions of Jews and headed one of humanity’s most cruel regimes, many mistakenly label Hitler as unintelligent rash.

However, no doubt that Adolf Hitler was extremely intelligent, considered as a genius of oratory, managed during his speeches to read the audience and persuade them with great efficiency. Another striking feature was his strategic profile, which enabled the Nazi army to advance in every way that a war of this kind needed.

Goebbels was the German politician responsible for elaborating Nazi propaganda. If Hitler managed to convince so many people, much is due to Goebbels’ communication techniques.

Whether on television or on the radio, all German public programming was carefully thought out and articulated in a way that praised the totalitarian leader.

For this reason, Joseph Goebbels was Hitler’s trusted man for a long time, reaching the post of one of the leading Nazi leaders at that time.

Occupying the post of military chief of the air force, Goering also had autonomy to deal with economic matters and military land maneuvers. He served in the World War I and later became the most powerful Army personal during the war. He was considered as Hitler’s right-hand man, his representativeness was such that he was appointed in 1939 as the successor president, in case Adolf died.

How did Nazi Propaganda Took Over Germany?

As chancellor, Hitler was striving to spread Nazi speech to the fullest extent throughout Germany. When he is already in his first year in office, consecrated as a sovereign leader and is seen by a large part of the population as a savior Messiah.

At that time, Adolf strongly criticized the Jewish presence in the German population. He argued that Jewish community were largely responsible for the crisis in the country (since many Jews were traders and had some wealth).

Since Nazism is considered a totalitarian movement, based on manipulation and hatred, in this period the perfect scenario for a kind of “witch hunt” was created.

Faced with this totally favorable context (Public approval), Hitler intensified the persecution of Jews (and other minorities in general). In 1933, Hitler government built the first Nazi concentration camp in the city of Dachau.

Since the beginning of Adolf Hitler’s political rise, prejudiced evidence and elements were already detected. However, it was from 1933 that the situation took on aggravated proportions.

The Symbol of Nazism?

Since it emerged as a political leadership, Hitler had favored the creation of a symbol of Nazism, which could represent all its ideological objectives. It was from then on that he retrofitted a symbol already known to mankind: The Swastika 卐.

The swastika is not exclusive to Nazism. It is a symbolism that was already present in various cultures around the world. And in each place, it had its meaning and representativeness. In Nazism, the swastika was the prototype symbol for white invaders.

In Hitler’s own words in the Mein Kempf, the explanation of the Nazi flag was as follows:

Nazi or German Holocaust was the genocide of approximately 6 million Jews in the course of World War II. And it is considered as the greatest mass murder of the 20th century.

All this barbarism was carried out exclusively by Nazi ideology, which had a systematic program of ethnic extermination.

Exterminations were not restricted to German territory, that is, as Hitler’s army advanced and conquered new lands. Thousands of Jews, Gypsies, Communists, prisoners of war, Poles, the physically and mentally disabled were killed without a chance of defense.

Concentration Camps and the Number of Deaths

The persecution and death of Jews took place throughout the Germanic territory in the most varied ways possible. However, Hitler built concentration camps to intensify and automate the way to exterminate Jews.

Under the initial excuse of environments for re-socialization and labor recreation, concentration camps were built where Jews were enslaved and subsequently killed.

This fact is already considered absurd. However, it should be noted that the victims were exterminated in the cruelest ways possible, inside gas chambers, tortured, burned, etc.

Before the Holocaust, Europe had a Jewish population of approximately 9 million. But after this genocide, the population is estimated to have dropped to just 3 million.

According to studies, the deaths totaled between 1 million children, 2 million women and more than 3 million men.

As noted above, Nazi extermination was not restricted to Jews, and according to recent research, Hitler’s dictatorial state was directly responsible for the deaths of approximately 11 million civilians (mainly from Eastern Europe and prisoners of war). (Source: Encyclopedia)

Connection of Nazism and Fascism

Both Nazism (in Germany) and Fascism (in Italy) are totalitarian regimes that emerged in a post-World War I scenario, with revanchist ideas and oppressive ideology.

There are several similarities between Nazism and Fascism, which can cause misunderstandings. However, there are also important distinctions that should be highlighted.

We can consider as one of the most significant differences between Fascism and Nazism the origin of each movement, since Nazism was originally born of the working classes, while fascism arose in the layers of the Italian elite.

It should also be noted that, initially, fascism did not have an anti-Semitic aspect (repulsion to the Jews). But it become a regime of hunting Jews only when Mussolini (the Italian fascist leader) declared himself allied with Hitler.

Another big difference is in relation to the much crueler character presented by Nazism, that is, fascism also persecuted its opponents, however, Nazism did this type of persecution in a much more cowardly, inhuman and barbaric way. In this way, we can say that the Nazi regime was responsible for many more deaths than the fascist. 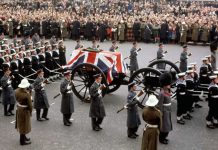 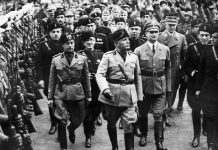