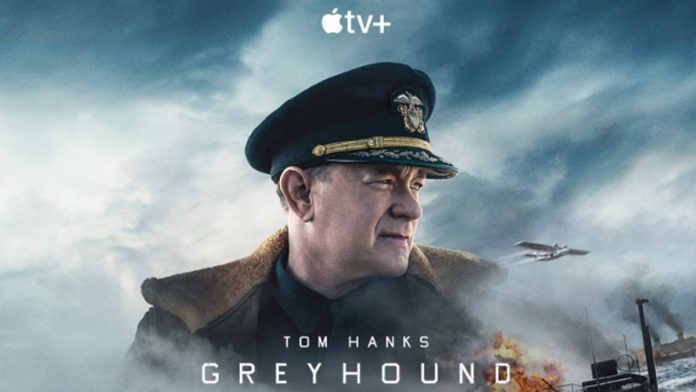 After the carnage of Pearl Harbor, a high-ranking officer far from being in the odour of holiness is entrusted with a first-rate mission in the middle of World War II. This is the starting point of a war film mown down by Covid-19, in which Tom Hanks was particularly invested as the protagonist of the Greyhound 2020.

To them is now added Greyhound (2020), a war film about the Battle of the Atlantic which, between 1939 and 1945, saw the Allies and the Germans clash on the waters of the ocean.

Greyhound is distributed under the Apple TV banner, a competitor of the overpowering Netflix and Amazon Prime. The pandemic eventually slashed its initial theatrical release and forced this movie to be released on streaming platforms.  Aaron Schneider is the director of this film, to whom this is the second feature film. Tom Hanks has on the other hand signed the screenplay for this ambitious blockbuster-like production. With the release of Christopher Nolan’s Tenet, The Greyhound become of the rivals but Nolan’s Tenet is also performing well as expected despite the lack of Nolan’s traditional features.

The film traces the story (fictitious but representative) of a US Navy destroyer accompanying a convoy of Allied ships to supply Liverpool. On the way, the German U-Boots submarines will do everything to block their way. A maritime war of arms and nerves.

Quick Immersion in The Shoes of a Captain

The audience is installed directly in the skin of the captain and hop German submarines, the terrifying U-Boats, come to chase his fleet and a long sea battle began with a lot of tension.

The first great thing, the whole exudes increased realism. Even if some facts have been added for a dramatic tension like the U-Boat which comes to hack the Greyhound’s radio to increase the level of terror among the crew. It doesn’t matter, because, in the end, the rest is fascinating. We have discovered in this movie, how a ship worked during World War II. Indeed, the film never hesitates to remain technical. No attempt at popularization for the general public. But we can reassure, it is not embarrassing, because the image makes it easy to understand what is happening.

In the end, it will really make you felt like you are aboard the Greyhound. Because the captain (Tom Hanks), for the entire battle, never leaves the ship. From then on, there is a little psychological tension that has settled in the audience, because we don’t know what is happening with the Germans. The latter then become real predators, worthy of the Bruce of the Teeth of the Sea.

Greyhound: In the Heart of a Naval Battle

The film is pretty generous in action, though the visual effects are not always there because of a not great budget while the particular context requires not to use them.

Despite everything, it quickly made the deadlock, because it is simply taking. As they say, when we go down in history, we easily forget this kind of technical flaws. In the end, Greyhound offers some pretty spectacular sequences. But above all, it offers naval battles of exemplary readability and that is sufficiently rare these days.

In the end, his only real flaw, which, paradoxically, is also his quality, remains that attaching himself to a single battle prevents him from reaching an epic scale as did, for example, Saving Private Ryan. For the record, we will note a similar funny ending. Finally, one thing killed me at the end: when I discovered that it was Tom Hanks who signed the script solo.

When to come to the Greyhound film review on a fairly critical note we have to consider numerous things including the protagonist. Undoubtedly, Tom Hanks is one of the most famous and talented actors in the world and considered to be very picky and a perfectionist. If he is undoubtedly one of the most famous actors in the world, with filmographies as rich as they are fascinating, he is less known for his attempts behind the camera.

As the USS Greyhound destroyer heavily heckled by the dangerous and rough waters of the Atlantic, the ship is shaken by the stormy winds of its qualities and faults. The hostile situation makes the ship unstable despite courage that allows it to move forward to accomplish its mission not without difficulty. In terms of qualities, we will cite Tom Hanks of course, who even sometimes does a little too much at the risk of caricaturing his usual game, does not demerit and brings a little emotional density to the film. In the case of Greyhound (2020) the veteran actor has played a rather less-identical performance like other films he did. Then, the staging of Aaron Schneider, certainly far from being stunning, but who tries to give himself a little personality through the effects of nervousness and very immersive photography. And finally, an almost documentary precision of the marine world in sharp dialogues of almost sickly credibility.

Unfortunately, where the film falls short is in its fairly limited writing. In addition to its Manichaeism which is understandable because by making the enemy invisible it increases the intensity of the immersive experience. But Greyhound does not tell much beyond an anecdote effect, suffering from a lack of narrative consistency both in the story and in the clumsy elaboration of its characters.

Remains a good action film, sometimes stressful even claustrophobic (like this scene of U-Boot hunting), which masters its suspense well and holds its course on the waters of the naval war film. One thing is certain, it would undoubtedly have been more effective on the big screen given its ambitions and formalism but the pandemic has devoured its chances and the primary opportunities that all movies aspire till now.

The different choreographies or manoeuvres that punctuate this rather collected film do not shine by their originality. But we feel that Aaron Schneider decided to make the most of his sequences outside the command post occupied by Tom Hanks. As soon as his camera gives an account of the games, he works on the sound, the texture of the image and a certain form of emphasis in order to give as much character and impact as possible to his film. And most often he succeeds. Whether we shoot, gun or missile, all these little people kill each other with a certain sense of tragic. And more than once, we find ourselves investing in these easy images, but obviously perfectly composed, where unleashed elements and war material clash.

Sadly, Greyhound doesn’t really manage to pull it off or deliver an original naval warfare tale, despite Tom Hanks’ investment. Interpreter of the main character, but also screenwriter, the artist may well have invested in the project, to the point of being publicly sorry that the film does not know the honours of a theatrical release. He is enjoying a role here expected, predictable and more superficial than usual.

A sort of echo to Sully‘s hero, his captain Krause is an archetype of an underdog, that is, this protagonist of American cinema initially despised by his peers as if he was not worthy of embodying the values ​​or the panache of the ‘American Way of Life. He will reveal his value in the face of adversity and especially the greatness that his humility conceals. Alas, Hanks part of the screenwriter is far from having the finesse of Hanks actor part, and we never believe in this captain that exceptional events will push him to surpass himself.  From predictable glances to jawbones, Krause is a flat, shallow surface that nothing makes us want to explore.

Even more annoying, if Greyhound takes care of the dramaturgy and the scenography of its wet skirmishes, the staging is clearly put in check when it is necessary to extract something from its human matter or to try to energize its long indoor sequences. Almost systematically stuck in a unique setting of soporific poverty, the film has great difficulty in bringing its protagonists into existence and giving flesh to their interactions. So many weaknesses that transform the whole into a generic story, never unpleasant, but nothing memorable.