TimeSpek
Home Entertainment Movies The Assistant Review: A Bold Approach to the Flawed Film Industry and... 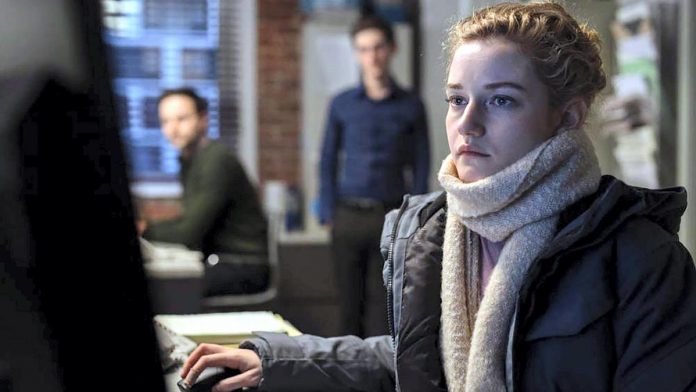 Jane, the protagonist arrives at the office before everyone else. Conscientious, diligent, she polishes her boss’s office, refines, and prints the latter’s timetable… A recent graduate in cinema, Jane dreamed of becoming a producer. Now, under the rule of a despot, she will slowly realize, and with dismay, how far her abuses go, Jane has not given up on her aspirations so much that she has lost sight of them, entirely devoted to her daily survival. In her first fiction The Assistant, Kitty Green never names Harvey Weinstein, but the presence of the fallen potentate hovers, between stealthy silhouette and voiceover. By focusing on the perspective of an employee trapped in an environment – an industry? – Complacent, the filmmaker sheds new light on the affair everyone is talking about.

The Assistant is a model to show in film schools for more than one reason. A writing model first, in a film that manages to say so much by saying so little. Kitty Green obviously takes her subject seriously, enough in any case to avoid a comfortable and harmless tale of cosmetic feminism where a fearless heroine would triumph over male predators. Green exposes an otherwise more complex oppressive system and does not treat his audience like children.

More than the words in this film of silence, it is the actions that speak. For example, printing photos of young women coming out one behind the other from a photocopier who is ready to be inserted into the sensual food chain. There are a lot of things left unsaid in The Assistant – or when we say, we make a joke of it: “never sit on the boss’s sofa”. Green manages to describe toxic solidarity within the boys’ club without making his film a folder on the educational screen.

The other impressive quality of The Assistant is its interpretation. The young Julia Garner discovered in Martha Marcy May Marlene and We Are What We Are, manages to play and express a lot of things with very few dialogues. There are regular murmurs behind the door in The Assistant, there are distant shouts on the phones – sometimes you hear a conversation but it can be in a foreign language. Jane, who is both assistant and housekeeper, is under tremendous pressure and is not fooled by what is going on. “What can we do?” ”, Asked a flabby upper that is supposed to help him.

In her captivating documentary Casting JonBenet, which evoked the fascination that still generates today the sordid death of a mini-Miss of the 90s. Kitty Green already spoke about female exploitation. The Assistant continues this gesture with great intelligence, where purity and restraint are at the service of this hot topic.

When the film premiered at the Telluride festival, several critics mentioned, among the influences of The Assistant that the clinical presentation of the tasks here, no longer domestic but professional with the key to such a devastating observation.

She did her homework and met a lot of people, Kitty Green, whose documentaries Ukraine is not a Brothel, devoted to women of the Femen movement, but also to the man who was pulling the strings behind the scenes before the main interested parties eject it, and Casting Jon Benet, who does not attempt to elucidate the murder of the mini-Miss, but rather questions the fascination engendered by it, made a strong impression.

In addition to the consistency of his approach, we note the filmmaker’s ability to tackle subjects from an unusual angle, however, abundantly covered. It is no different in The Assistant, whose focus remains pegged to that of Jane.

Jane is followed in her disturbing professional routines, then degrading, but at the same time insidious in their alienating repetition. It is so much that the protagonist, for the most part of the film, seems not to be aware of it.

The Assistant Depicted With Relentless Sobriety

But now, you don’t need to see the vice to feel that it is tightening: eventually, Jane reaches a breaking point. When she is responsible for accompanying an assistant even more novice and naive than she is at a hotel where she will join the ogre.

However, we should not expect some punishment or act of cathartic revenge. Kitty Green does not give in the genre of narrative facilities that a traditional Hollywood studio of the type that she denounces would have rightly favored Miramax. The sequence of the human resources complaint is, moreover, uncompromising psychological violence. Although the variations of ordinary machismo of Jane’s two male colleagues perfectly illustrate how the toxicity of a manager can change in corporate culture.

The filmmaker’s manner is sober but relentless. That is to say, it’s staging – measured, patient – works by the accumulation of revealing fragments that moviegoers have to “read”. The result is a hypnotic effect that allows sharing the state of amazement to a certain extent but gradual, in which Jane slides.

In the role, Julia Garner is formidable, completely in tune with the approach of Kitty Green. The haggard eye barely hunched beyond her age or suddenly on the lookout to her silhouette. The actress suggests a lot by doing little; a well of internalized conflicts at the bottom of which Jane risks sinking.

Painfully but essentially, the film refuses any form of cinematic solicitation: a substantial bias if any. Ultimately, The Assistant is a fascinating prelude to the MeToo and TimesUp movement which has been portrait wonderfully.