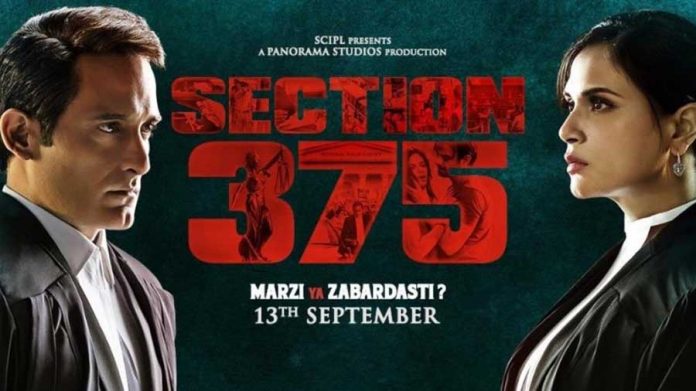 “Section 375” is a captivating story of Rape and Revenge that unveils with a slow and critical plotting. Akshay Khanna as Tarun Saluza is shining in the edge of this outstanding court room drama. On the other hand, Richa Chadda played prosecutor Hirel Ghandhi was just her typical performance like other movies. Eventually, the final scene in the court room obliviously reflects what was quoted in the beginning of the movie by Tarun, “Justice is abstract and Law is a fact.”

The story starts with a very short scene with utter disappointment of a lady lawyer and right after the scene Tarun Saluza a bright and successful lawyer delivers his speech in front of a bunch of young law students in Indian Institute of Legal studies and Research, Mumbai. During his speech, 3 important rules of this vigorous profession has been mentioned. First, Law is not equal to Justice. Second, never fall in love with law. And third, Justice is abstract and law is a fact. Which later on justifies in the final plot of this film.

Anjali Dangle, an assistant costume designer leaves from her house and goes to Director Rohan Khurana’s house to discuss costumes. During that moment the Bollywood director Rohan forcefully rapes her and sometimes later she files a case to police. The medical examination is run on both the victim and the rapist. On that very day, Police arrests Rohan from his shooting spot and charges him with section 375 along with some other sections. Unlike other movies, the court sentences Rohan with 10 year of regressive imprisonment depending on the evidence and victim’s presentation.

The story of “Section 375” takes a new turn while Rohan’s wife hires Tarun Saluza, a senior and successful lawyer to file petition and defend the accused. Despite disagreement from wife, Tarun took the case. In this moment of time, the public outrage has already sky rocketed.

In the first day of the hearing, defense lawyer Tarun unveils number of facts, never mentioned before. Firstly, police officer kept the evidence for five days hoping that a settlement could be done. Secondly, Anjali’s brother bits him after the incident believing that she is also involved. With these rigorous facts, the story takes hard turn and revels that the victim and the accused had relationship. In the further plot, Rohan confessed everything in the court regarding their illicit relationship which developed on the basis of Anjali’s Bollywood career as head costume designer.

Now the logical reasoning and factual evidence makes Hirel Ghandhi presenting the court for a case of unprivileged girl. On the basis of the factual evidence, Rohan’s confession and his position of power make the judges upholding the decision of the session court. Eventually, it is proved that the victim Anjali has taken her revenge cold blooded successfully due to no existing evidence in favor of the accused.

Section 375” is a compelling and eye-opening story of a Bollywood director played by Rahul Bhat and his assistant costume designer Anjali played by Mera Chopra. Since this is a courtroom drama, lawyers have a very strong role and as a result Akshaye Khanna played the role of defense lawyer and Richa Chadda holds up with the role of public prosecutor. If we closely observe the roles of lawyers, Akshaye Khanna is brilliantly shining in the character while Richa Chadda has rather given a stereotypical performance.

On a similar note, both Rahul and Mera performed well yet they could be more into their characters. Though the characterization of Mera was very subtle and realistic but the depiction of revenge did not come on her face. Richa Chadda as a prosecutor, couldn’t articulate her experience in presentation as it was described by Tarun’s assistant. On the other hand, as Khanna is sparking as a defense lawyer, Richa is barely holding up her court room performance. In compare to Rahul and Mera, Shriswara performed really well. She looked devastated from within and acting is just flawless.

Plotting couldn’t be better than this. “Section 375” is an outstanding movie if we judge from the technical ground of chronological plotting. In this case, Manish Gupta, the writer has wonderfully scripted all the plots that captivated the audience with suspense. Though suspense is loosely upholding in this courtroom drama yet people are caught up in that. The beginning scene is the single factor where Richa seems disappointed, and the second scene has created much curiosity about what is going to happen next.

The short hearing and quick decision of the conviction initially feels shocking, but ultimately, it was a wise decision to keep people on hook. Unexpectedly, the story takes a turn when Rohan makes the confession. Which, on a logical ground seems very inconvenient. Another key point, from the police complain to first court hearing, plot is missing the timeline.

“Section 375” is not like other movies seeing from one perspective. Rather it presents, two different versions of the story taking turn from rape to revenge. The film is also highlighting the role of media and social media where public is giving judgement depending on one sided fact. Moreover, it is clear that the effect of social media and public outrage reflects the decision of the judges. So, in short, “Section 375” is an audacious, realistic and captivating story with top-notch performance by almost all the characters.