How Much is The Rohingya Crisis Affecting Bangladesh?

Kamruzzaman Saif
September 25, 2018
According to the report of United Nations, more than 1 million Rohingya have fled to Bangladesh due the ethnic cleansing of Myanmar government but the real scenario is beyond that. This massive influx is one of the biggest refuge crisis of 21st century and Bangladesh is comparatively smaller and poor to accept this amount to people as host. Despite the risk of national safety and economic crisis The Hasina government is backing the humanitarian crisis with the help of international aid organizations which is not enough. But their is a big question that ‘how does it affect Bangladesh ?
Some report says that Cox’ s Bazar has folded with humanitarian organizations and hotels there are making enough money. Many aid organizations are providing millions of dollars and Bangladeshi reputation in the humanitarian work is getting recognized. But these are not the bigger pictures or any benefit for this densely populated country.
Bangladesh is suffering beyond our imagination out of this Rohingya Crisis and in many ways it has become vulnerable for the nation’s National, Economic  securities.
National Security is one of the most affected issue in this densely populated country. The 88% population of Bangladesh is Muslim and there are various terrorist attacks committed in Bangladesh despite the Governments strong hold on the Fundamentalist activity Bangladesh. After the Rohingya refuges took shelter, the risk of militant attack become more strong and there was some extremest organizations statement to target Bangladesh. The opportunity can be taken by the extremist and could recruit people from these Rohingya Refuges and most probably, The Arakan Rohingya Salvation Army (ARSA) could be their right choice. Another fact is obviously there. On the other hand there is a strong possibility that there are a lot of Moles/agents from Myanmar or its allies with political intention. The growing fear among the locals are growing and already some occurrence has taken place in Cox’s Bazar and other locations. So It is pretty Alarming for Bangladesh that its national security is under threat.
According to Bangladesh Government, an estimated $434 million has been spent on Rohingya crisis since the crisis evaporated and till march 2018, $322 million has been donated by various organizations and the rest is spent by the Bangladesh Government. As Bangladesh is comparatively small and poor than other developing nations and the cost is and will affect entire economy of the nation. As per the agreement of repatriation with Myanmar, only 300 Rohingya people will be taken back per month and the problem will not be solved until 2025. This long procedure will expense more than $4,433 million for sheltering and feeding them and still this crisis will require much more than the estimated expenses. Due to long repatriation process, The National Economic Council of Bangladesh government has sanctioned $280 million to establish a refuge camp for Rohingya in Vasanchar Island. So economically Bangladesh is at huge crisis and the future is still uncertain whether it will be possible to deport all the Rohingyas or not.
The crisis has become one of the biggest political challenges for the government which could be solved long ago if the government could draw proper international diplomatic attention to this ethnic crisis. The violence erupted in 2012 which drove those Rakhain people to Bangladesh. The biggest power behind Myanmar is India and China who are unequivocally backing the inhuman act. There is enough political turmoil regarding the refuge crisis and the upcoming election can be highly affected. The regional political power like India and China may play a gutter game. The crisis has also affected the entire community and it will be tough for the leading party Awami League to get a positive result. 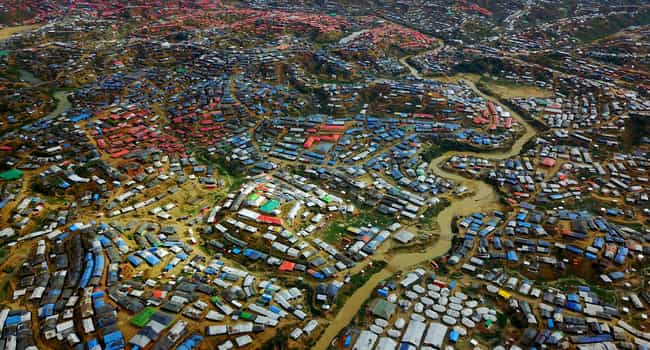 The growing fear among the local society of becoming minority in the place has become the major concern for the locals and the people of Feni and Cox’s Bazar are getting frustrated out of the impact that has stricken upon the community. Some locals said that, food price is going up and it has been tough to get enough job for the local labors, even the labor cost has been less than it was in last years due to uncountable Refuges working under the identity of Bangladeshi local. Not only in the hosting local area but also the entire country is devastated by the crisis. Along with the social strain the environment is also being destroyed. The green hilly area has become the most populous refuge camp in the world and refuges are cutting down those hills and establishing their shelters. So the social and environmental crisis are also being affected ever since the Myanmar Government’s atrocity began.