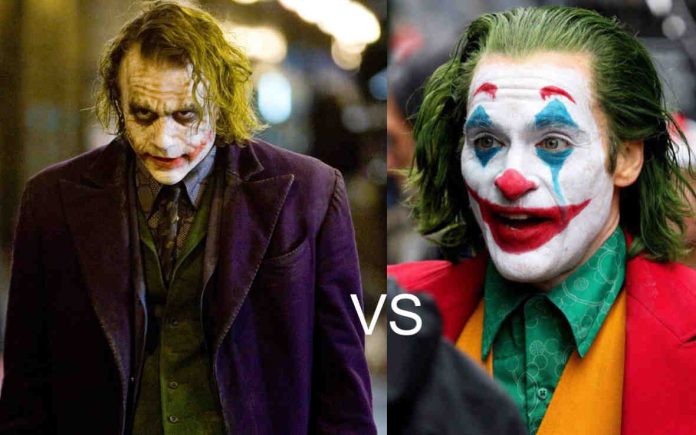 Jocker was the most anticipated movie of this year. And there is no doubt that Joaquin Phoenix has had an outstanding performance. Yet, can we compare Phoenix with the iconic Ledger for the legendry DC comic character ‘Jocker’? Who played the “Jocker” well?

Jocker directed by Tod Phillips and starred by Joaquin Phoenix has been the biggest cultural news for last couple of months. Besides, despite being an R-Rated film, it has created buzz in the box office. Phoenix’s Jocker has already broken the previous records of all other R-Rated movies while still on theaters. This character from the DC comic book is so popular that more than 25 movies have been made on this notorious psyche till now. Among all these actors Heath Ledger became widely popular and considered to be beyond the best. However, Phoenix’s performance put a question mark and gave birth to a question like, Heath Ledger Vs Joaquin Phoenix?

It has always been unexpected that anyone can outperform Heath Ledger for this particular character. Heath Ledger is still the legend for the Joker character. Though Phoenix also executed Joker very well.

Background of The Joker

Before we jump into any conclusion and make the comparison, we must go back to the features of this character. As it is described, Jocker had a very deprived childhood and grew with many psychological challenges. Regardless of the psychological disorder, he maintains an ethical and logical balance that disfavors rich citizens of Gotham. Moreover, the resilient and aggressive features of his character make him more popular to his followers from his time and real fans among the livings. Additionally, his vision takes over citizens of the entire city of Gotham and turned it into a movement. So most probably, Jocker is the most popular villain of all time who has a dark global impact.

In my opinion, both the actors have been great in compare to time, context and acting techniques. Christopher Nolan and Tod Phillips have similar perspectives however the technique of characterization is individually unique.

Heath Ledger perfectly played his ferocious role in the Dark Knight against the famous Batman. He was more like a villainous character with an outlandish personality. Similarly, Dark Knight being a super hero film, depicted Joker with more strength. So, if we think about Heath Ledger’s performance, we are obliged to admit that, it was great and deeply dark at its most. Nolan’s Joker was a vigilant who never appears in public until he has anti-rich agenda. A minimalistic depiction of Joker in Dark Knight, made him more original than Phoenix in “Joker”. Besides, as a leader of the movement, he earned more attention among movie goers. Therefore, in a sense, Heath Ledger has been a nemesis for all the Joker characters.

On the other hand, Phillip’s Arthur Flack has taken Joker to a more realistic level and Phoenix was just amazingly florid. Though Phillips borrowed references from “Taxi Driver” “Raging Bull” and “Modern Times” which was a cleaver move but it makes the movie feel less like an original creation. Over the top, characterization of Arthur Flack by Phoenix was more nihilistic than any other films.

Arthur Flakes latent character of joker makes him sad and it turns into a ferocious pathetic nemesis for a movement. Unlike Heath Ledger, Phoenix plays a role of an operatic joker aspire to become stand up comedian. Despite being penchant, he cannot prosper even as a street clown. And eventually the failure as comedian provokes him show the middle finger to the existing system. All these little incidents draws this character to an utter realistic extent. Since, joker is the protagonist here, so audience get to know his entire character.

In my opinion both are legend in their own point. If we judge Heath as Joker in the context of Batman then he did a mervelous job. Because in compare to Batman’s character, Joker had to be very rough and tough as Heath played. Though joker in Batman was antagonist and his personal character was never revealed. Yet the unknown Joker was rather better with his dark, reselient character.

From the perspective of the film Joker, Phoenix has provided a raw expression as it should have been. The zethziest character that he revealed has been a realistic move and gave the character brand new vibe.