In order to fight global warming, the world’s richest nations constantly organize summits, sign agreements, and invest millions of Euros so that we can secure our and our upcoming generation’s future.

Due to the COVID-19 carbon emission dropped significantly and nature is reviving again and to keep this going we can do something individually which is not tough yet extensively effective for the reduction of global warming.

Do we know that everyone one of us, on their own scale, can make a contribution to try to preserve our planet? In particular, we have the power to reduce greenhouse gas emissions, which are responsible for global warming with alarming consequences. The following six simple actions can reduce the aggressively growing global threat of climate change.

In particular, three different trash cans occupy the space and putting the glass bottles in the container after a party evening takes time. However, these are very simple and generous gestures we show to our mother nature which can have a very significant positive impact.

In France only, recycling waste avoids the equivalent of 5% of annual national CO2 emissions. Though apparently, it does not seem like anything, yet it represents all of the air transport in France, and 20% of automobile emissions.

Waste treatment also makes it possible to produce recycled raw materials, thus avoiding extracting them. This transformation saves 124 terawatt-hours which are equivalent to producing 18 nuclear reactors. This also amounts to 80% of the electricity consumption of French households.

Saving electricity might look nothing to you but this is another simple gesture that can contribute to reducing global warming. While the energy itself is not harmful, the effects of its products are very damaging. On the one hand, electricity from nuclear power produces radioactive waste which is harmful to both humans and the environment. According to World Nuclear Association, France generates more than 75% of the electricity from nuclear power plants. On the other hand, thermal, gas or coal-fired power plants are generating the rest and they all are contributing to greenhouse gas emissions.

To try to weigh on this heavy industry, it is enough to change a few small habits at home.

First, by replacing its conventional bulbs with “low consumption”. LED lamps are the best solution since they consume little, last a long time, and light well. They have a relatively high financial cost but which can be amortized if they are guaranteed for at least 20,000 hours. We can even run them for longer if you turn your lights off when you leave home. Admittedly, lighting is not the main pole of electricity consumption in the home. According to EDF it only consumes 2% of total household electricity consumption. Environment and Energy Management Agency shared a rather different statistic that says 5% of energy is consumed by household lighting. Put aside these statistics, if we think collectively, then how much electricity is consumed in household lighting worldwide? Huge and we can save a significant amount of electricity just with a flip of a switch.

According to EDF figures, heating represents 62% of the energy consumption in a house around Europe. A few simple steps can help maintain the heat, such as closing the shutters, installing double glazing, replacing the seals if they are not working properly. But we just need to think about the world and make these simple actions.

To a similar extent, reducing the temperature of washing machines and dishwashers also allows you to use less electricity, especially when the programs are shorter.

A bad habit is consuming a lot of energy throughout the world that of leaving the chargers plugging in without anything at the end, or overnight. The transformer, located on the outlet, continues to consume electricity unnecessarily even when the device is fully charged, and even if there is nothing at the end of the wire. Disconnecting those cables only takes a second.

Did you have any idea that some new eating habits can reduce the emission of CO2, deforestation, and water consumption? The reduction of meat consumption or total elimination will do a lot. Animal breeding is responsible for 14.5% of greenhouse gas emissions, in particular, due to deforestation, the UN report says. Trees trap CO2. And when they are cut down, the carbon is released in the form of greenhouse gases.

Ninety percent of the land recovered from the Amazon rainforest after cutting off trees is being used for livestock to graze or to produce its feed. The cutting off and livestock grazing both are making a definite impact on CO2 emissions.

Meat also requires a very large amount of water (much more than growing cereals). Reducing the consumption of meat, and therefore production thus avoids all these inconveniences.

In addition to meat, poor consumption of fruits and vegetables can also harm the environment. We must favor seasonal and local products. The problem with strawberries in the middle of winter is that you have to bring them in – and sometimes from afar – since they cannot grow in France. A journey that leads to high emission of greenhouse gases, and which also requires a lot of energy. A little patience, they will eventually appear in our greenhouses, just wait a few weeks.

Even if the cause and effect are much less visible, high water consumption also leads to CO2 emissions, in particular, because the treatment of wastewater consumes a lot of energy.

Of course, agriculture is the main center of water consumption (48% of the national whole, according to the water information center) and households represent only 24% of the water used. But again, if the impact is much less, it still does not prevent action.

In France on average, a resident consumes 145 liters of water per day, 40% of which is for hygiene only.  Therefore, it takes a few simple gestures to save water and money, such as taking showers instead of baths. But you can also turn off the water while soaping, brushing your teeth, etc.

Of course, it is not always easy to take the bus to reach the villages. But if the car cannot be replaced either by public transport or by bicycle, CO2 emission won’t come down.

If this solution is unthinkable, it is possible to catch up during the holidays. Taking the train rather than the plane, not only avoids the high consumption of kerosene, but also the condensation that forms after the passage of the machine and increases the formation of clouds, which themselves cause the warming of Earth’s surface.

Avoid What Is Disposable

Current consumer habits produce an incredibly high amount of waste. According to French Environment and Energy Management Agency, 354 kg of waste is produced per person. However, most of this garbage is incinerated (30%) or stored in landfills (36%). Besides, the smokes released due to garbage incineration, it produces a lot of greenhouse gases.

But it is possible to reduce everything that is disposable, in particular by banishing them little by little. In the kitchen, the paper towel rolls can be replaced with sponges and tea towels. Food silicone, non-disposable and which washes between each use, takes the place of the stretch film. Vintage lovers will be enthusiastic about the return of the tissue, instead of disposable tissues.

For shopping, non-disposable canvas bags replace plastic, and self-service in paper bags can replace the very numerous packaging. While in the office, the glass or the cup can help to avoid the single-use of many plastic cups.

Just think about everything that we could do to reduce carbon emission. We actually can take little steps individually to save our mother nature from the aggressive destruction. It’s our turn to return something to nature. 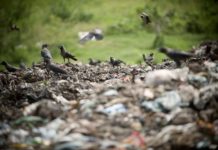 The Severe Effects of climate change on Biodiversity